ETHICS AND ANTI-CORRUPTION COMMISSION
EACC > News > Your Right, Your Role, Say No to Corruption

Your Right, Your Role, Say No to Corruption 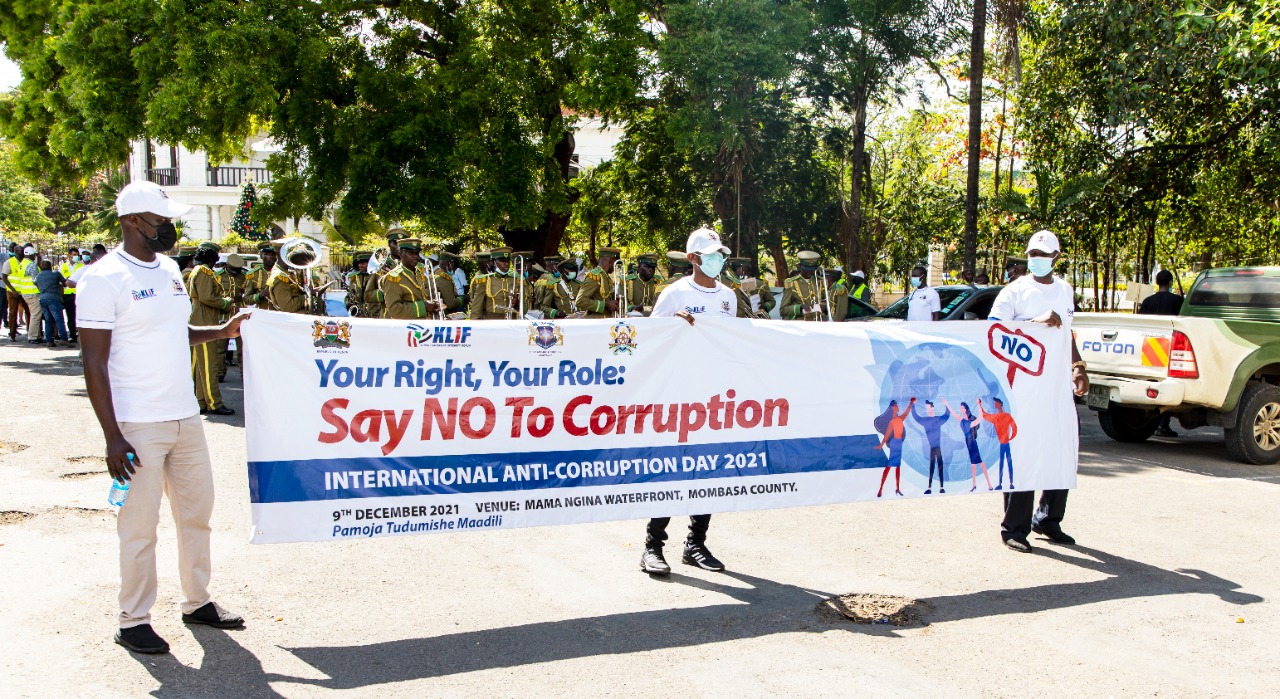 14:12:2021: This year’s International Anti-Corruption Day theme, Your right, your role, say no to corruption, seeks to articulate everyone’s role and responsibility in the fight against graft. Isiolo and Mombasa counties hosted the ceremonies dedicated to the theme.

In Mombasa, the national event was held at Mama Ngina Waterfront where Attorney-General Paul Kihara Kariuki, who spoke on behalf of President Uhuru Kenyatta, encouraged the public to have a spirited common purpose and individual commitment in the war against corruption as expressed in the theme.

“This year’s theme is most apt as it places all stakeholders squarely at the centre of the efforts to slay the dragon of corruption” said the A-G.

Highlighting some of the government’s efforts and achievements in the fight against corruption, he cited the Mutual Legal Assistance programme with its goals of increased repatriation of proceeds of crime held outside the country, extradition of graft suspects, and the receipt of key evidence to support both local and international based cases. These, he said, are the steps the government is taking to catch those who hide their ill-gotten wealth beyond the borders. It is done in collaboration with international partners and relies a lot on the digitization of government services which he said continues to offer the greatest opportunity in the fight against corruption.

Noting that the country had made some progress in the war against corruption, he acknowledged that there were some challenges and urged the public: “As this year’s theme sagely recognizes, in the fight against corruption, each of us is a soldier at the frontline.  Victory can be delivered but only if each of us plays our rightful role, and if we work closely together.”

He challenged the public to uphold values of integrity, hard work, and sacrifice, and to shun the corrupt, shame and refuse to place them on social pedestals. “I conclude by reminding us all that we are all called to renew our commitment to a just, fair, and equitable society in which there is shared prosperity based on hard work, integrity, and corruption free success,” he said.

On his part, the Ethics and Anti-Corruption Commission Chief Executive Officer, Mr Twalib Mbarak, urged the public to elect leaders of integrity as the country gears up for next year’s General Election.

A series of anti-corruption activities was launched from the 2nd to 9th  December in both Isiolo and Mombasa such as school and public outreaches, football matches, town hall youth engagement forums, trainings for public officers and interest groups like church and mosque engagements, public barazas and corruption risk assessments for county executives and assemblies.

On 31st October, 2003, the General Assembly adopted the United Nations Convention Against Corruption and requested that the Secretary-General designate the United Nations Office on Drugs and Crime (UNODC) as the secretariat for the Convention’s Conference of States Parties (resolution 58/4).

The Assembly also designated 9th December as the International Anti-Corruption Day to raise awareness of corruption and of the role of the Convention in combating and preventing it. The Convention came into force in December 2005.