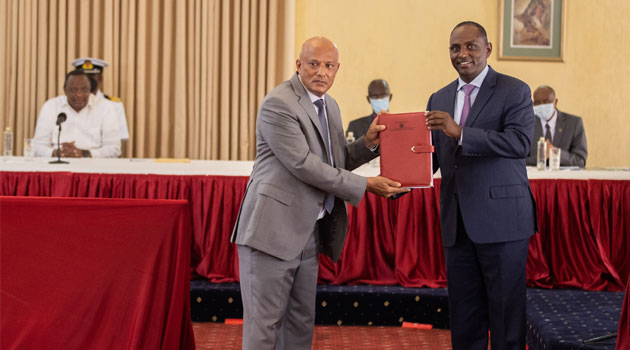 The Ethics and Anti-Corruption Commission (EACC) handed over to the Government 39 title deeds for public property worth Kes. 5.2 Billion recovered from private developers. The property, which includes parcels of land belonging to various public institutions and county governments, had been grabbed in collusion with public officials.

EACC handed over the title deeds during a ceremony witnessed by His Excellency President Uhuru Kenyatta at State House, Nairobi on 4th April, 2022. President Kenyatta also witnessed the ceremonial handing over of Kes. 450 Million corruptly acquired funds repatriated back to Kenya from Jersey.

In his keynote address, His Excellency President Uhuru Kenyatta called for concerted efforts to scale up the war against graft, saying that the fight against the vice forms the soul of the nation. While acknowledging that notable gains have been achieved in curbing corruption, President Kenyatta said the country cannot afford to sleep on its laurels until the vice is completely eradicated.

“We must all work together that is, all arms of Government, the business community, media, religious institutions, non-governmental organizations and the ordinary Kenyans to fight this noble war,” the President said.

Speaking at the ceremony, EACC Chairperson His Grace Archbishop (Rtd) Eliud Wabukala, EBS appreciated the continued support that the Government has extended to the EACC in discharging its mandate. He called for stronger inter-agency collaboration noting that the milestones made so far are proof of the enhanced synergy and cooperation between EACC and other actors.

“In the recent past, we have witnessed progressive jurisprudence particularly in the area of unexplained wealth, where courts have held that unexplained wealth will be presumed to have been acquired corruptly,” the Chairperson added.

In his remarks at the event, EACC CEO Mr. Twalib Mbarak, CBS said that the Commission is currently pursuing 357 civil cases filed in various courts across the country seeking to recover public assets valued at Kes. 14 Billion. He added that EACC is in court seeking forfeiture of unexplained wealth valued at approximately Kes. 7.6 Billion from persons alleged to own assets disproportionate to their known legitimate sources of income.

“The Commission will intensify the tracing, preservation and recovery of all unexplained and corruptly acquired assets through civil proceedings and Alternative Dispute Resolutions (ADR),” the CEO said.

EACC has since 2013 recovered properties worth Kes. 30 Billion. Besides the 39 titles deeds handed over on 4th April, 2022, there are other 24 recovered parcels of land worth approximately Kes. 6.1 Billion, whose title deeds are at various stages of processing. Among them is a 21.04 Ha prime land belonging to Meteorological Department located in Nairobi City’s Industrial Area off Enterprise Road valued at approximately Kes. 5 Billion and three (3) parcels of prime land for the Kenya School of Government, Nairobi valued at Kes. 63,000,000.